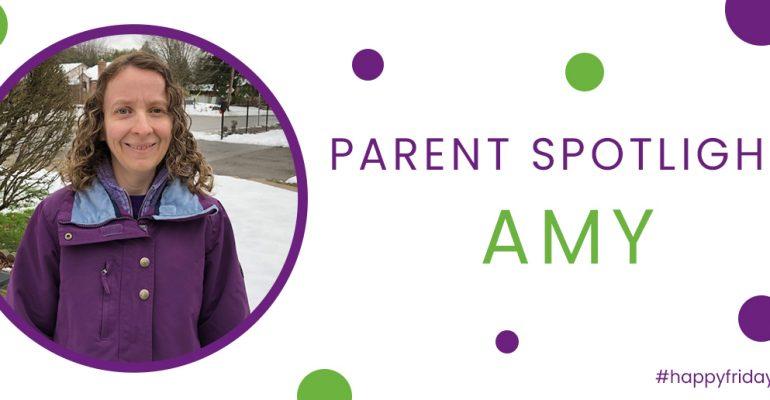 My name is Amy, and my oldest son has epilepsy. My son's first seizure is difficult to recall because for a long time, we didn't know that's what was happening. Somewhere around the age of four, my son started having “episodes" where he would say, “Mommy, I'm so hot". His face would go white or sometimes his cheeks would flush, and often he would fall asleep afterward. These episodes were infrequent, and we thought it was just one of those strange childhood things. Time went on and one day he had an episode that was different from the others. He told me that his tummy didn't feel well and when the episode passed, he said, “Mommy, where was I when I wasn't feeling well?" It was as if he'd lost memory of that period of time. I did an internet search of all of these symptoms and found that they could be signs of seizures. Several trips to our family doctor resulted in a referral for an electroencephalogram (EEG). A few weeks after the EEG, our family doctor called to tell us the news: our son was having seizures. I cried. My husband and I worried about what this meant. Would he need to go on medication? How would medication affect his development? His personality? What challenges would he face? There were so many questions.

One thing we quickly learned about epilepsy is that seizures can take many forms. My son has been aware and able to converse with us during all but one of his seizures. He does not have convulsions, but he does have sensations that tell us that seizure activity is happening in his brain. These are called 'auras', and for my son, it is a feeling of an upset tummy. This is a common type of aura, but they can take other forms as well. I think it is important for people to know that seizures do not all look the same.

We met an Epilepsy Educator from Epilepsy Southwestern Ontario (ESWO) at our very first neurology appointment at the hospital. She gave us a booklet about epilepsy, and we scheduled an appointment with her to receive further education. The timing of this appointment was significant. When your child is diagnosed with a health condition, you become overwhelmed with information. You leave the appointment with the doctor thinking, “why didn't I ask that?" When we met with the Epilepsy Educator at ESWO, we were able to ask her everything that we didn't think to ask at that initial hospital visit. We also received advice that was crucial to setting us on a positive trajectory after his diagnosis. In the years that have followed, we have continued to receive support from ESWO. Every year, an Educator visits my son's class to give a presentation about epilepsy.  I have also participated in a skill building program for parents of children with epilepsy. Additionally, both of my sons have gone to fun events hosted by ESWO. We have been so grateful to have them with us throughout this journey.

Epilepsy has affected our lives in both challenging and positive ways. I have learned to accept a degree of uncertainty that wasn't there before. While we do our best to minimize triggers, seizures can happen when you least expect it. I also worry more about normal childhood things than others do. A common virus, infection and especially a fever requires vigilance to reduce the chances that it leads to a seizure. Living in a pandemic adds a whole new layer of worry.

Our lives have also been enriched since the diagnosis. I have created stronger connections with teachers and school administrators than I would have without epilepsy. We have found a circle of support amongst my son's friends, their parents, and our family that has uplifted us. I have also been blown away by the support we have received for our Seize the Day Walk fundraising efforts for ESWO. It is hard not to be positively impacted by such generosity.

One thing I have learned about myself through my son's journey with epilepsy is that I can be an advocate for my children. I can be proactive in standing up for what I know they need, and I can ask for help when I need it. I can be a warrior mom!

I would like other parents of children with epilepsy to know that if they are feeling alone, there is support out there. Reach out through one of ESWO's platforms and someone will answer the call. I truly believe there is strength in the support we can offer one another. Have courage, ask questions, seek guidance, and know that there are often ebbs and flows with this condition. Sometimes you are making your way through the storm, but these periods pass, and brighter days come again.