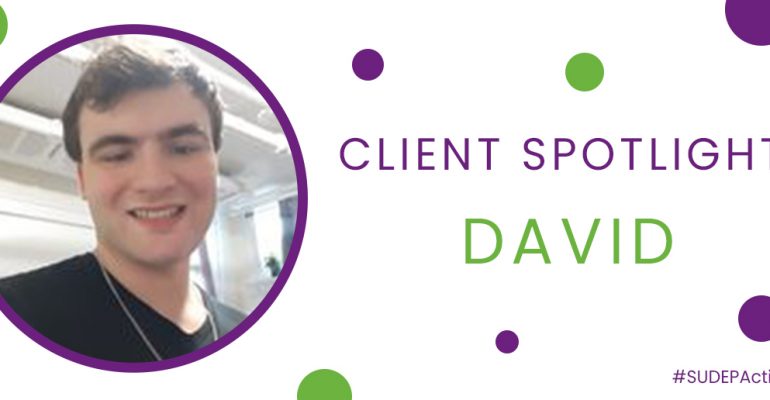 It’s hard admitting to yourself that your son was really tormented by his illness (epilepsy). Our son had his first seizure when he was 13. It was a tonic clonic seizure and it lasted 13 minutes. David had epilepsy as well as ADHD and learning disabilities. He hated being different and he hated the stigma that came with saying he had a seizure disorder, so he kept his epilepsy hidden from most people. As the years went by, we thought he was doing well with his seizures effectively controlled until his early 20s, when he suddenly required medication changes and began having more tonic clonic seizures. He did not live with us, as in his words, “I am a grown man, and I don’t want to live with my parents.”

David was an avid skateboarder, always trying the hardest, most daring tricks and keeping at it until he landed it. He was well known to several local skaters and was very generous. David used to skate at Atkinson Park as well as Charles Clarke Square. Last summer David was watched and cheered on by a young boy and his father. David approached the boy and his father and let the boy try his skateboard. The boy expressed interest in skateboarding, but his father said he could not afford a board. The next day David brought the boy a new board and told him he would teach him how to skate. David was also known to give away food, clothing, and jackets to people who are homeless and never posted it or bragged about it. I found out about his generosity when I took him to an appointment one day and he was approached by a man who was homeless who shook his hand and said, “Hey, I never thanked you for being so nice to me.” He was always thinking of how to help others.

David was a very sweet, thoughtful person. However, he suffered from depression from time to time and he would drink alcohol. When he realized the alcohol was causing more seizures, he quit drinking and did his best to put one foot in front of the other. He went to counselling and tried very hard to regain his memory skills. He knew he needed help for his mental health and was not afraid to seek it. He wanted to go back to school for welding and really wanted to travel. He always said he wanted to visit the UK, see the mountains in BC, and skateboard across the globe. He had plans for his future, and through counselling he was working on a plan for success.

Eventually David’s short-term memory became very bad and got worse after every seizure. He struggled with keeping track of his days and could not remember tasks, which therefore meant he could not hold a job. I kept track of all his appointments for him. He had difficulty with his sense of time. As an example, one week would only seem like a day for him. We even had his medication put into blister packs and delivered weekly so he could keep track of his medication. David would complain to me that the memory loss and forgetfulness from having seizures was making him feel dumb. He also suffered from insomnia because he would not sleep at night as that is when he would have seizures. Instead, he would sleep during the day in 2–3-hour intervals.

David did his best in the last year of his life to accept his epilepsy and began letting friends, neighbors, and potential employers know that he had epilepsy. We felt very proud of him for finally accepting his seizure disorder. David and I chatted online every single night and we saw him daily. On March 2, 2021, he told me he was not feeling well. I told him to get some sleep and that I would check in with him the next day. I messaged him throughout the day on March 3 but did not hear back from him, so my daughter-in-law and I went to check on him that night. We found my beautiful son on the floor beside his bed, his body contorted and strained. He had already passed, obviously from a seizure. The coroner’s report cited cause of death as SUDEP. We knew SUDEP was a possibility but never in a million years thought it would actually happen to David. We were so humbled at the amount of people who came to David’s funeral and shared memories of how he helped them. I miss him, his messages, his smile, his humor, his being. We were, and still are, devastated, but we try to honor him. On his birthday this year, one of his best friends held a Skate for David Memorial Day and we raised $400 for Epilepsy Southwestern Ontario. It was such a success that it will now be an annual event. We miss our son and some days the grief is overwhelming, but we continue to work through it and share memories of him, as well as remember to be kind, like David.